The capital of Egypt, Cairo carries definitive blend (or one might say call it a ‘clash’ instead) of the old and new – in terms of its people’s ways of life, customs they abide by and so on. We’ve all read about Egypt’s marvelous ruins and long gone kings and their lavish burials. But not many can picture what it’s actually like to be in Cairo. In this city guide, we unearth some of that mystery for you.

Khan El-Khalili: a long-established economic and cultural hub, this marketplace has been – and still is – a good representation of Old Cairo since the 14th century. There are many options to eat in this place but if you want a safe bet go to the Mena House Oberoi Hotel. Though they serve at the overpriced-for-tourists price, the accessibility of alcohol could provide worthy refuge for some. 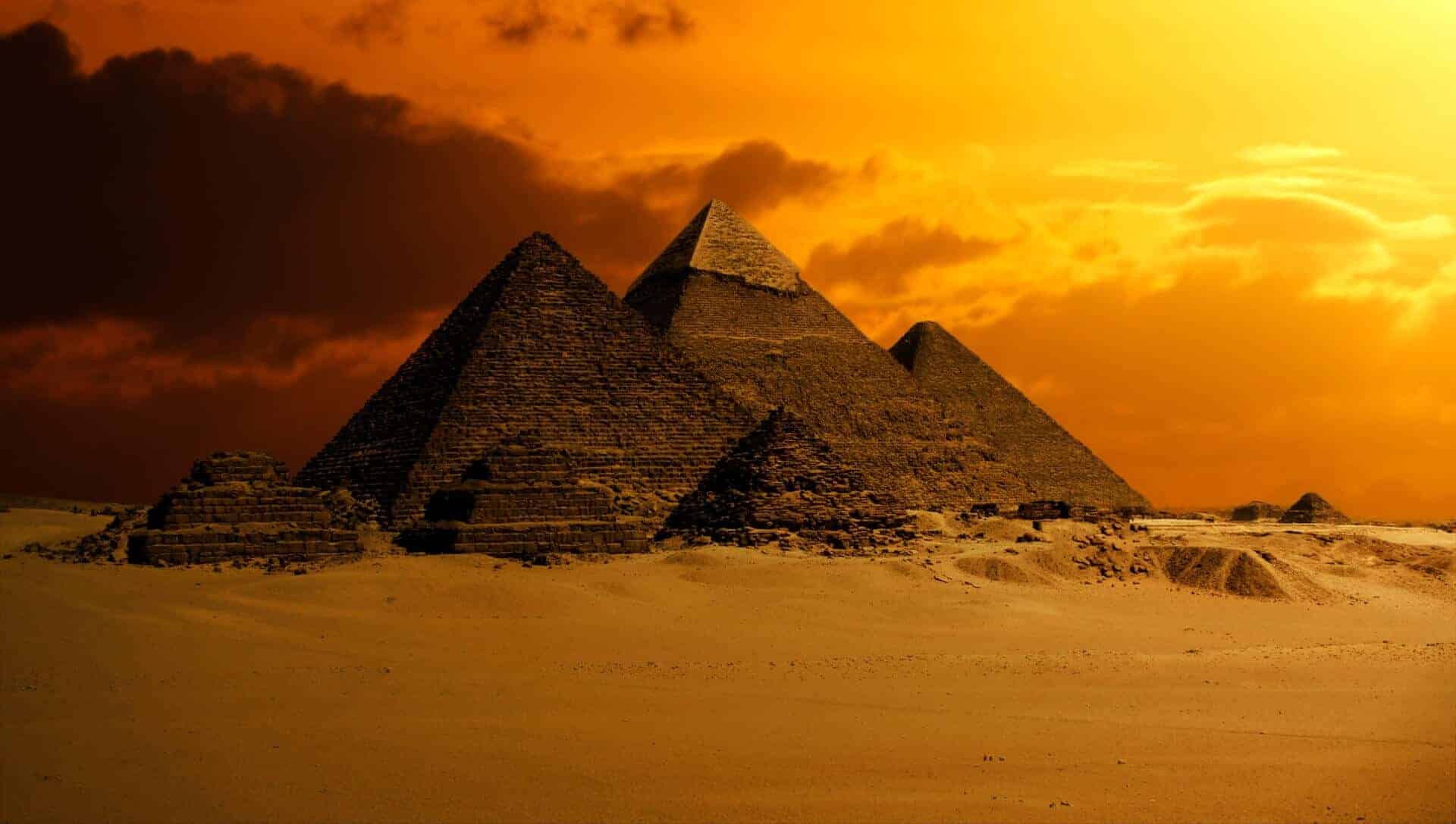 A pyramid on Egypt’s desert landscape

The Pyramids of Giza: Whether you opt for a tour or explore on your own, keep in mind that it’s a vast expanse of land that could take up a whole day. Though modes of transport will more closely be discussed in its own section, there’s an abundance of options to get specifically to the pyramids from downtown Cairo.

In the heart of downtown – precisely Midan Tahrir, or ‘Liberation Square’ – is the world-renown Egyptian Museum. You won’t be surprised to find the world’s most extensive pharaonic antiquities’ collection here, but will be stunned nonetheless.

Valley of the Kings is another historic site that come close to conveying the pharaohs’ sheer power back in the Old Kingdom.

For a visually different flavor of the ancient, visit the Mosque of Muhammad Ali in the Citadel of Cairo. It is the most popular Islamic mosque in the nation, proudly showcasing Ottoman architecture from the medieval times.

Like most major cities, districts within Cairo each carry a different flavor. Every district is different and here are the basics you should know before going to any of them. 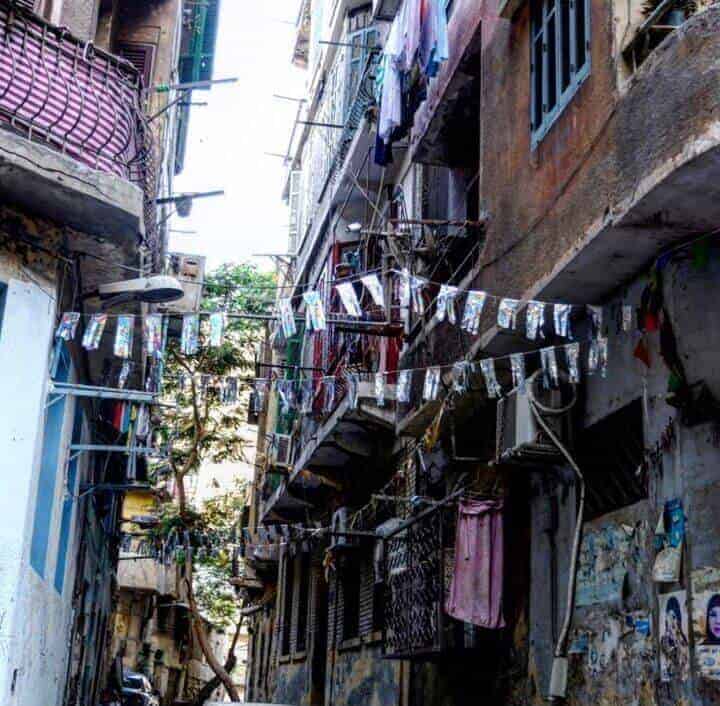 Streets of downtown Important to note: Don’t carry camera gear in this area; anything resembling journalists will disturb the locals.

Downtown Cairo, Medieval (or Islamic) Cairo and Old Cairo are self-explanatory labels – the last of which complements New Cairo (or Heliopolis). The last is a rather exclusive wealthy suburb, among the ranks of posh neighborhoods Zamalek, Garden City, and Maadi. The segregation according to none other than wealth (not race, politics or religion) is quite apparent. For example, if you compare those regions to Islamic or Medieval Cairo they’re rich with historical remnants and heritage sites, but not in terms of the residents. 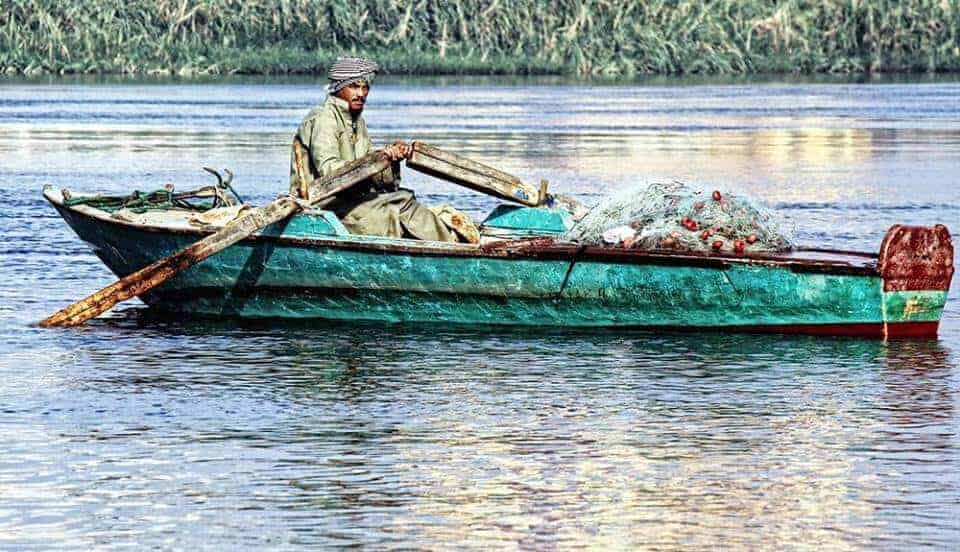 An Egyptian carrying out his daily duties on the Nile River

While pork is rarely found, as a majority-Muslim nation, Egyptians’ eating times and pattern are also fused with Mediterranean influence. Mezzes (small plates, i.e. appetizers and salads) are ubiquitous, especially at lunch: the biggest meal of the day, taking place in the afternoon (1-3pm).

Sobhy Kaber, Abdo The Butcher and Neama Restaurant are recommendable for generally good Egyptian food, as well as the franchises Arabiata and Gad Restaurants, both at numerous locations. You can find, practically anywhere, grilled meat (Egyptian kebab and kofta).

Starting from pigeon meat to koshary, Egypt offers cuisines worth exploring. Should you want to add another experiential factor into your dining, try Fel-Felucca where food is served on a boat on the Nile. Visit for dinner for a sunset view guaranteed to take your breath away.

Still feeling a tad indecisive? Admittedly, our words deserve less credit than other Egyptian locals’. With Talk Travel App, it takes no more than a simple question to gather instantaneous, extensive knowledge from an expert of the city.

You may think Cairo is a chaotic city but underneath it, there’s a functional, decent public transportation system. Though taxis are rarely necessary, in case you resort to one of them, be aware – at the very least – of the three kinds (black, white and yellow).

Now, onto the buses – which too, have different kinds. Microbuses are even cheaper versions of the regular (and already cheap) CTA (Cairo Transport Authority) buses, but are not recommended especially for females. While CTA buses run on scheduled times, microbuses run haphazardly with no apparent patterns.

The metro is not only an integral part of Egyptians’ lives; it’s also significant because it was the first one in Africa (there are only two on the continent, so far). Some stops/stations are situated underground. With a basic knowledge of the region names and a reference to metro lines, the system is easy for visitors to navigate.

Alexandria is a port city two and a half hours from Cairo by car, also accessible via trains (or tours for those who want it all simplified). For the latter option, Egyptian Railways is considered the most reliable and efficient and heed this comprehensive timetable. Like Cairo, it too teems with an impressive amount of monuments, museums and ancient structures like the citadel/fortress. Just like Cairo’s got the Nile River, Alexandria has a waterfront promenade: the Corniche and the Eastern Harbor.

Extra concerns – Traveling as a woman, or with a child

There are some spaces where you can feel more insecure, be hyper-aware at those. Foreign women are easy to pick out because of their different way of dressing so be careful of your surroundings. These precautionary words are not to be taken so gravely as to deter anyone from travelling to Egypt, even if you’re a solo-journeying female. Being aware of the reality of a place can help you stay out of dangerous situations. Also, read our guides on female solo travel to prepare yourself.

There’s no extra need to worry about taking children to Egypt. With the type of activities, Egypt affords for families to enjoy, plus the substantial history lessons to be learned, kids are sure to have a memorable experience.

Remember to visit our other destination guides to inspire your travels!